I’ve always written – since I was very small. I used the top step of the stairs as my desk! I was originally a poet and was lucky enough to be named Young Poet of the Year at seventeen, but then I found the transition to being an ‘adult’ poet pretty tough, so my focus shifted and I went travelling and then to university and ultimately became an English Literature academic. I honestly thought I would spend my life on the other side of books, critiquing and analysing them, until I went to Las Vegas and all that changed. I’d never thought I’d write fiction and hadn’t tried for about ten years, but the people-watching in Vegas was amazing and I started thinking about writing vignettes about the incredible characters I saw there – all the exhausted waitresses, pregnant brides and drunk gamblers – in the way Raymond Carver (who I was reading a lot of at the time) beautifully and simply conveys the lives of ordinary people in his work. But then I took a bus from Vegas to the Grand Canyon and back and saw all the small towns trying to make it out in the desert and my first novel, Welcome to Sharonville, was born. Suddenly I knew the characters I thought were from Vegas were actually from the fictional town of Sharonville and they crowded in to tell me their secrets and regrets.

I would like to write daily as I do believe it helps with ideas and stylistic evenness to keep up momentum, but mostly life and sometimes my health issues get in the way, so I am mostly a binge writer now – I produce huge chunks in one or several days and then have a break. I do hope to get back into a routine in the autumn though, once the book promotion has eased off a bit, but I must admit I’m finding that immense fun too! I’m loving meeting so many new interesting people and going to different places.

I write literary fiction – usually set in contemporary America, but with a slight magical realist quirky twist. My current works in progress are both literary thrillers though so I think I may be shifting direction a little.

I have always loved American literature and am primarily influenced by modern American writers like Raymond Carver, Paul Auster, Richard Ford and Lorrie Moore. I’ve travelled a lot in the States and my grandfather used to live there, so I feel a real cultural affinity for America and also adore its vast and very different landscapes. For a writer, such settings are a dream come true!

I write in a literary way probably because I’m a poet at heart and can’t help loving word play and metaphorical language! I do still feel literary work should be accessible and pacy though and that’s why I also admire writers like Anne Tyler and Anita Shreve who are great storytellers, but also write with real elegance.

There is an element of crime in Welcome to Sharonville, but I think I have turned towards writing mystery novels now as I feel all books are mysteries really – the question of ‘Whodunnit?’ is at the heart of any novel you might pick up, except outside of the crime world, what was ‘done’ might not involve blood, but just a lie which wrecked lives or a love which was never told.  I am an avid crime show fan though – I love all flavours of CSI, for instance! – and that might have had an influence on me too! 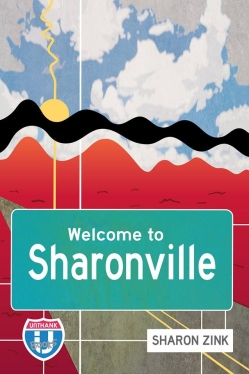 My debut novel, Welcome to Sharonville, has just been published by Unthank Books and is about what happens when a young History professor, Toni Sorrentino, crashes her pick up in the Arizona desert a few days after 9/11 and the secrets which come out in her small home town of Sharonville as a result.

I often feel like Heathrow Airport with potential novels circling my head ready to land, so I have started four new novels, but have decided to focus on completing Emptiness, a literary thriller about two female astronauts set in a slightly alternative time line where women were involved in the Apollo space program and onwards to a much greater extent. I had a fantastic experience researching it at NASA and doing a short course of astronaut training at Kennedy Space Center where I landed the Space Shuttle simulator first time – something which apparently most astronauts never do! I think it was the proudest moment of my life! (Yes, I am a geek!)

At my website – www.sharonzink.com. I interview authors every Friday on my blog, The Book Diner, and readers can also click through to the site for Welcome to Sharonville where you can see a hand-drawn map of the town, read The Sharonville Enquirer and even become a citizen!

Thanks so much for having me in the Booth!

Welcome to Sharonville is available on Amazon UK and Amazon US.

4 Comments on In the Booth with Ruth – Sharon Zink, Author