Trista Hendren is an author and a feminist activist. She co-founded Rapebook, which is a Facebook page set up to campaign against rape humour and other abusive content including child sex abuse images on Facebook. She shares her extensive experience of reporting to Facebook, in particular during the time Rapebook was being hit daily with up to 500 abusive links, comments and messages by attackers who also made rape and death threats.

Trista, can you tell me what prompted you to create the Rapebook page on Facebook and what were the aims of the page?

I noticed that many women I knew via Facebook were having issues over the course of about 2 months. I began to connect the dots and wrote an article that included examples from a variety of women from around the world.

The more I opened my eyes to what was happening, the more frightening it became, particularly as it related to teens and young girls. I ended up writing a series of articles. Then I was involved with a group of feminist administrators of Facebook pages. Ultimately, we formed Rapebook as a protest.

Our primary concerns were child sex abuse images—and other sexualized images of young girls—and violence against women. As we got into it, there were many things I just wish I had never seen. The prevalence of pornography and images of child sex abuse on Facebook is just huge. Those are things that we could not of course re-post. So a lot of our work was under the radar.

We were criticized that some of the things we posted were really “not that big of a deal.” I think it’s really important to note that what we felt we could post ethically as opposed to what we actually saw ourselves, and tried to deal with amongst ourselves, were two very different things. One admin in particular was singled out in a horrible way. They even went after her 12-year-old daughter.

After several months, it became increasingly heated, resulting in death and rape threats.

Many people thought I should abandon this work, particularly after the threats. My kids are still fairly young, and had I known it would turn out this way, I probably would not have done it.

However, I felt that I could not stop once I started. I can’t ignore the fact that I have a daughter. She, like all of our daughters, is at a tremendous risk for sexual violence. I knew that if I stopped, I would always blame myself for not standing my ground.

I think Facebook is very dangerous because it normalizes this violence to an enormous audience. Our collective consciousness is being very badly damaged by pages that glorify rape and abuse of women and girls. If we don’t stop this, I believe we will see significantly more rapes and violence.

When the page was attacked by sick individuals posting horrific content, including images of child sex abuse, how did Facebook handle that?

Facebook was always very responsive and professional – I will give them that. But in terms of action, the word impotent comes to mind. Yes, this is offensive, even horrible – but we can’t stop free speech. 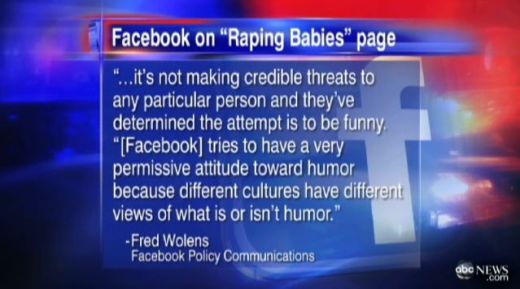 What generally happened was that the content was removed if it was a threat or a picture of an actual rape. But I would do things differently now. When Facebook removed pictures, it later meant that the FBI was not able to prosecute, or even investigate, those individuals due to lack of evidence.

So because Facebook was not removing these comments and posts, you were left with no option but to close the page in order to stop Facebook hosting that content?

The page is actually still up – it is just no longer active.

At one point, we did take it down for a few days because the trolls were targeting us with the intent to have the page removed. We wanted to leave on our own terms, so we took a time-out and came back later.

The reason that we did log off was that it began to affect all of our health. I was the sickest I have ever been for about 2 weeks. You can actually see one of my eyes is bloodied in the ABC television interview I did – and that was weeks after being almost exclusively in bed, which is not like me at all. It took weeks for me to be well enough to even do the interview.

Another admin started throwing up all the time. It was really disgusting work. And, we just began to think, why are we devoting all our efforts on a volunteer basis to do work that Facebook – with billions of dollars – should be taking care of?

It was a never-ending shit workload. The harder we worked, the more we found. It was impossible for us to keep up—and we began to question whether we were even making a difference.

We felt we would make more of a statement by posting a final letter to the page for all to see.

Do you think Facebook should be charged with storing and sharing images of child sex abuse?

Absolutely. I strongly believe that one day, they will.

Are you aware of profiles on Facebook used for human trafficking?

Yes, I became aware of that only recently. I find it both horrendous and inexcusable. I believe most people have no idea what is on Facebook. Perhaps they don’t want to know. I’d like to think if more people were aware of these human rights violations, they would leave the site altogether.

Do you believe Facebook’s recently announced participation in Thorn‘s technical task force will be enough to combat child sex abuse images and human trafficking on their site, or do you think there are other measures Facebook could also be taking?

No, I do not believe Facebook has done nearly enough. They need more trained moderators. They must have a zero tolerance policy on images of child sex abuse and human trafficking. That needs to be made clear to everyone. One of the biggest problems I see now is that no one really understands what their policies are. There are many things they could do that would make Facebook safer for children. The Red Hood Project has done a tremendous amount of work around this, as have many others, such as the Global Alliance against Minor Exploitation (G.A.M.E.).

I ended my last letter to Facebook, which can be read in full online here, as follows:

Facebook does not have to be a platform for rapists, pedophiles, men who beat up and kill women or other criminals. The way I see things now, Facebook is no better than a hotel owner who rents out a room to a creepy man with a half-naked child and listens to her scream while he counts his money.

I don’t believe anything will truly change until more people join this fight and put pressure on Facebook. Many have been working on this issue for years. Many more joined in with the #FBRape campaign, but abruptly stopped after believing we had a victory.

We don’t have a victory until children are not exploited on Facebook any longer. And we mustn’t stop fighting until that day comes.

To report images of child sex abuse or suspected child trafficking, Rik Ferguson, Global VP of Security Research at Trend Micro, recommends people in the UK contact the Child Exploitation and Online Protection Centre (CEOP) and if you are in the US, the National Center for Missing and Exploited Children (NCMEC).