Can you tell me about your new book?

Well, I’ve got two out at the moment. Byker Books have published Guns Of Brixton as part of their Best Of British series. It’s a knockabout, foul-mouthed and violent gangster yarn.

Pulp Metal Fiction have just published Gumshoe, a blackly comic story of a middle aged divorcee living in a run-down English seaside town who decides to become a private eye.

What sparked the original idea?

For GOB – as I like to call it – I wanted to write a fun tale with a colourful cast of characters. Like an Ealing Comedy but with more swearing.

With Gumshoe it was the Stephen Frears film Gumshoe – about a bingo caller obsessed with Bogart – and Mike Hodges’ Pulp. Plus a big slice of Tony Hancock and Billy Liar. It may be grim up north but you can make the mundane magical.

What research, if any, was needed to write it?

Nothing for Gumshoe – a world I know well.

For GOB, I had to check a couple of London locations.

Can you share about the writing process – did you plan in advance or write it by the seat of your pants?

I’ve never planned anything in my life! I always start writing with some vague idea in mind and see where it goes.

Could you describe two or three of the characters from the book and explain how you created them?

Well, I tend to base characters on people I know and then put a spin on it.

In GOB I have BeBop DeLuca a sax playing hitman. The reason behind that is that I thought a sax case would be a good place to hide a gun though I’m not sure if that’s true.

Jack Martin, the gangster in Gumshoe, is based on Sir Alex Ferguson – the Manchester United manager. I wanted a powerful autocrat and he came to mind!

Is there a particular message in the book you’d like readers to understand?

To quote Kinky Friedman ‘Everyone’s an asshole but the biggest assholes are the ones that don’t know they are.’

Where can people buy the books?

Guns of Brixton is on Amazon UK here and Amazon US here.

Gumshoe is out soon on Amazon UK and Amazon US plus Smashwords and a few other joints. 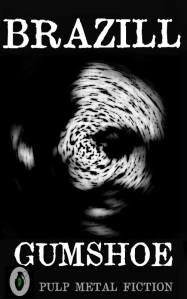 All over the place but my blog is a good place to start.

7 Comments on Crime writer, Paul D. Brazill, is in the booth with his latest books: Guns of Brixton & Gumshoe