When did you first take an interest in music? What inspired you, and how did you begin creating your own music?

I have always been interested in music and performance, going back to childhood. I come from an entertainments/arts background so it was in the blood I guess. My parents had an excellent and broad taste in music, as well as their friends/contemporaries who were often about the house and together that’s what first inspired me to want to perform. Initially, I used to write poetry but then became curious as to how people wrote songs. So, using my piano lessons as a starting point I combined this with poetry at the age of about ten or eleven and began to write. Still only a teenager, I had performed with Ray Charles on a record and never wanted to do anything else. The Beatles, singers such as Ella Fitzgerald, Julie London and Peggy Lee were inspirations and later the likes of Kate Bush, Janis Ian and Annie Lennox.

How would you describe your music?

Original! I am a singer/songwriter in the classic sense of the word, penning classic melodies and lyrics. I like to experiment with many genres and essentially if it moves me I want to sing it or write in that style; problematic for producers/record companies trying to niche me but with new contemporary trends of mixing up genres, hopefully less so. Whether its “Lost Boy” with The Herbaliser [Jazz/Rap] or just me and my guitar doing something akin to Simon and Garfunkel meets Adele – audiences don’t seem to mind the variety, so long as you move them, which is what matters.

What subjects do you most enjoy writing songs about?

Authentic life experience but conveyed in an accessible way: either that of others or my own, particularly those of women – and relationships.

What draws you to those subjects?

I am drawn to such subjects for the emotion and the impact that has, both positive and negative in our lives, usually carrying a message of hope.

You have chosen ‘Middle of the Bed’ for readers to listen to. Can you tell me what inspired that song and what it means to you?

Having experienced the toxic break up of a relationship, I knew only too well what it was like as a woman/lone parent in my thirties to go through that and come out the other side; having come to terms with it and its impact. Having done so I saw others experiencing the same emotions and feelings – what it is to find yourself “sleeping in the middle of the bed too long” and wanted to share that with listeners; that they are not alone in it and that there is hope after that experience.

What has it been like as a woman in the music industry over the past twenty years, and have you seen any changes for women in the business?

It is and historically always has been a tough industry to be in as a woman. Still largely male dominated and traditionally one where women were seen as problematic by companies because of their predilection to go off and have babies or to end up exploited and/or controlled according to whatever the current hegemony/trends are; be that appearance or content, all are factors. This meant that I myself put off having children until later in life for example. I remember well, being told by Alison Moyet backstage at the Albert Hall to be quite sure what I wanted as my visual style before I walked into a record company office and let them pigeon hole me. Age is another factor and not just because of the way you look. For example, I also recall being asked whether I was the wrong side of twenty-five. This has as much to do with how controllable or compliant you are as it does your looks. One has only to look at what the industry did to the likes of Brittany Spears or indeed Amy Winehouse to see how behind the scenes, little has changed. Same machine: taken in, chewed up, spat out.

Thankfully times are changing in that now there is veritable rash of female artists thanks to the likes of Adele breaking the mould, other strong artists such as Beyoncé and Alicia Keys out there and I’m all for it. However, sexism and sexual exploitation of women in the industry has not in my experience changed – sadly, the ‘casting couch’ is alive and well, despite how it may at first appear. The old dinosaurs are still out there, peddling the same carrot so it’s a minefield to negotiate, with women artists – often very young ones with well-meaning but naïve parents – needing all their wits about them to circumnavigate it, along with all the other potential pitfalls. Certainly, strong female performers such as Nina Simone and Dusty Springfield for example have in the past done their best to blaze a trail, but disappointingly, even in the 21st century, sexual exploitation still occurs for those trying to break through. Given the shrinking pie the music industry now fights over due to downloading and people wanting music for free, this makes for very choppy waters indeed! So watch out – in the words of the Chief in Jaws: “You’re gonna need a bigger boat!”

My most recent project is my EP Richmond Park Sessions, which won Best EP from a Solo Artist in the music awards for a US radio station. Its getting airplay in the States and here in the UK but as ever, the life of the indie music maker is a difficult one where we are expected to do (all) the work of what was multiple departments at record/publishing companies. Whereas previously [pre-digital] the issue was getting distribution, the problem now is distinguishing you above all the rest that is out there and crucially – supporting yourself whilst doing so. Particularly when people will spend several dollars or pounds on a coffee in Starbucks but expect to pay little or nothing for a download. So I’m still pushing my EP and performing live at reputable venues and festivals, which support and encourage indie artists as part of the British Post-Digital New Wave. It’s very exciting and there’s some wonderful talent out there. 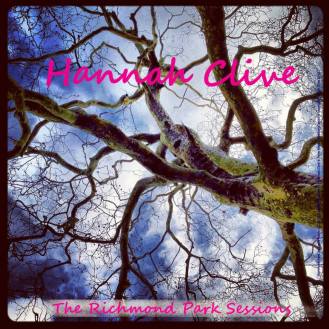 I have been busy working on new material for Richmond Park Sessions 2, whilst hoping that the EP Part 1 will continue to garner interest with fans and industry alike – which it is. Virality is the key here and people’s support and promotion of what we are trying to do as artists. I believe it is crucial that people recognise their own role as receivers of that art in keeping grass roots art/music alive; its what leads to Coldplay and bands such as them, hell that was the original premise of Woodstock and Glastonbury. Plus of course it’s our culture and that too needs to be able to flourish. What would Picasso have done if as a young artist he had not been able to sell paintings in order that he could buy paints and brushes to create more?

They can find out more about me all over the web. i-Tunes for my EP and I have a website at www.hannahclive.com with links to my Facebook page, Twitter, Soundcloud, etc…take your pick.

3 Comments on In the Booth with Ruth – Hannah Clive, Singer & Songwriter