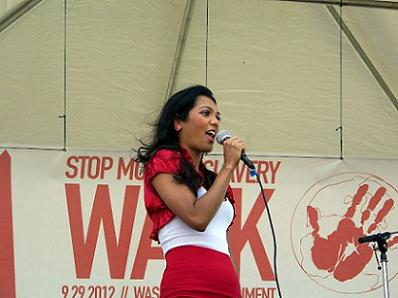 How did you become involved in the movement against human trafficking?

I learned firsthand about human trafficking from survivors in Cyprus. I went on a study abroad program in college and met enslaved workers who had been tricked to come into the country. Their stories of beatings, rape, house arrest, threats on their lives and family members – they horrified me and broke my heart. As soon as I met the victims, I wanted to help.

What draws you to support people who are trafficked and sexually exploited?

The cruelty and gruesomeness of taking away someone’s freedom, dignity, and innocence makes me more angry than I can put into words. I have always been drawn to underserved groups and advocating for exploited people. When I meet survivors and hear what they have gone through but then also see how strong they are despite what they have endured, I can’t help but act. Their traumas are so expansive and ongoing that they propel me forward. Victims of these crimes are like any person you meet at work or a party or school. Fortunately for me, I was never targeted by traffickers, but when I meet victims I can’t help but think “that could have been me.” A realization like that comes with a heavy burden and obligation. I was lucky, so I feel called to help those who are not.

What does your work involve?

My work against human trafficking involves legislative advocacy, independent consultations, trainings, and public outreach. I helped draft legislation in the state of Maryland to strengthen anti-trafficking laws and broaden criminality to activities such as forcing someone to strip. I also testified before the Washington, D.C. City Council on human trafficking legislation in the District. As Deputy Chair of Public Awareness for the Maryland Human Trafficking Task Force, I led and organized trainings for people who would most likely encounter victims, from school administrators to social workers. I continue to hold trainings and workshops for different first responders, including health professionals. I worked to increase efforts against human trafficking and sexual exploitation at the United Nations where I was Advisor to the Ambassador of East Timor.

Most of my advocacy right now involves raising awareness among the public. Being Miss Wyoming, United States gives me a unique channel to reach diverse audiences. From fashion shows to galas to parades to sporting events, I often have a platform to speak about combating and preventing human trafficking.

One of my favourite ways to fight slavery is through motivational speaking. It is only one facet of addressing the problem, but by encouraging at risk groups that they have value and making myself accessible as a mentor or resource, I try to minimize the influence traffickers have in luring in victims. The more positive, genuine outlets potential victims have to remind them of their beauty and worth, the less susceptible they are to attention from traffickers.

What legal improvements or changes would help to abolish human trafficking and sexual exploitation?

The definition of human trafficking must encompass forcing someone to perform sexual acts and activities outside of intercourse. The government must allocate specific funds for training first responders, law enforcement, and mental health professionals on the signs of trafficking and how to best assist victims.

There is a desperate need for more shelters for human trafficking victims. Too many victims end up in detention facilities after they are rescued, as if they are criminals.

Citizens and foreign victims have to be afforded equal rights and protection.

Any talent can be utilized to help fight trafficking. Singers, writers, dancers, actors, painters, sculptors, and other artists can all create work that expands an understanding of the problem. Assistance really can be as broad and creative as you allow it to be.

I plan to do more motivational speaking with at risk groups and human trafficking survivors. I have several upcoming television and radio shows where I will discuss human trafficking and sexual exploitation at length. I also plan on continuing to assist with legislative outreach and collaborating with other anti-trafficking advocates.

There are several upcoming projects where my love of acting, film, and creative writing will align with my interests in fighting trafficking. Poetry, spoken word, and dramatic performances will all be part of my work. I am highly committed to promoting groups who use the arts to enlighten others about human trafficking. The LIFE television series is one such project that I will closely follow and assist in any way possible. I hope to soon begin working on my own documentary about slavery.

In February, Light the Dark Campaign will launch its incredible initiative to unite anti-trafficking advocates around the world. I will be promoting the campaign actively.

Finally, my website will be up in the next few months, with an entire section devoted to my human trafficking advocacy. Be on the lookout for it!

Information on Light The Dark Campaign, which launches its full website and promotional materials in just 35 days.

Shared Hope International works around the world to fight human trafficking and has special initiatives to end demand. Shared Hope also has a focus on child sex trafficking.