It’s October, Breast Cancer Awareness Month. The world is pink. We race for the cure. We stand up to cancer. We support our loved ones battling or surviving the disease, but there is one population we never mention: women with breast cancer behind bars.

Imagine the feel of shackles on your ankles. Hard, cold steel does just what it’s supposed to do. It cuts into your ankles and restricts your movements to baby steps. Even when you are very careful, you wind up with blisters or ankles rubbed raw. The weight alone drags you down.

Now imagine handcuffs. They too are designed to restrict and they can chaff and cut, especially if the guard who cuffs you is having a bad day. His bad day becomes yours.

It’s two o’clock in the morning and the halls of the jail are bustling with guards dragging chains while inmates stand restlessly against the cinder block walls. Dirty cream walls, faded black and white stripes, clanging, clashing cuffs and shackles. All that plus the commotion of fifty female inmates and ten khaki clad jail guards prepping us for the trip to court.

I’m not going to court; I’m going the hospital to have my breast cut off. It’s time. I’ve had the poison. Now it’s the slashing. Then it will be the burning. Poison, slash, burn. That’s what they call chemotherapy, mastectomy, radiation. Poison. Slash. Burn.

I’ve been cuffed and shackled since 2AM. Everyone is exhausted and freezing. We’ve travelled linked together to the courthouse to be locked in the old morgue for several hours. The morgue is like an ice rink, but despite the cold, there are those little tiny roaches everywhere. They add to the despair.

Finally, when everyone else has been called to court and I am alone with my fears, I hear my name – “Allen, move it out!” – followed by the armed guards. I shuffle out to the jail van, jangling as I shuffle. The backs of those vans are cages, not designed for safety. There is a plastic bench, but no seat belts, so I lurch each time we turn a corner. I cannot balance myself because of the cuffs and shackles and sometimes I crash to the floor.

Bruised and shaken to my core, we finally arrive at the hospital. I shuffle inside through the lobby to the holding cell and wait all day, still alone and very afraid. I’m crushed with a feeling of shame that I’m now much less than human. At last, I’m escorted to the OR. There the cuffs are removed, a gown is thrown at me and eventually I’m led to the operating table. Still shackled, I climb upon the table and as I begin to go under, the shackles are removed. The guards will stay in the corner to watch as my breast comes off.

Five hours later I’m out of anesthesia upstairs in the jail ward, bandaged and sore but alive and still alone. On this particular journey, I am not touched except by the surgeons with their knives and the nurses with their needles. On three separate occasions, I ask for a pastor or a priest, but no one comes.

When I finally return to the jail, the women surround me with love. At the darkest time in my life, the drug addicts, the prostitutes and the thieves looked after me and I will never forget them. It is nineteen days before the medical department sees me to clean up my incision, take out the stitches and look for infection.

This is the way all women experience breast cancer behind bars. There is no comfort or solace. They go alone, they suffer alone, they return to their prison alone. Some might think that they deserve it, but I don’t think anyone deserves that kind of horrific treatment. It is devastating and demeaning to all of us as human beings.

It’s a dreadful journey inside or out, but there are many ways to take it. It’s one thing for Robin Roberts, Christina Applegate, Cynthia Nixon or Sheryl Crow to face cancer. They have the very best doctors, loving family and friends to surround them, and the entire world to care. They are deemed heroes by the press.

I wonder how they would handle the isolation that inmates deal with and the incredibly hostile indifference they face. The lack of information, attention and care. I was lucky. I have been both a patient with cancer and an inmate with cancer. There is a world of difference. I was diagnosed before I went inside; I went inside with my medical records and a high profile identity. That’s probably the reason I got treatment. Gina, my young cellmate, didn’t have that advantage and she died a painful death, not of breast cancer but of myeloid leukemia. There are many, many others who fought bravely through pain, fear, exhaustion and isolation and they died anyway.

Ask yourself how you would handle this kind of journey? These women are mothers, wives, and daughters, many in prison for addiction or low level drug crimes. When they should be healing, they are worn out fighting for treatment, constantly reminded that nobody cares.

In 2013, 296,980 American women were diagnosed with breast cancer and nearly 40,000 died of it. Everyone who battles this disease is a hero. It is harder than you can ever imagine. I am free now and miraculously still alive, but there are thousands I’ve left behind in jails and prisons all over the world, alone and afraid with their cancer. 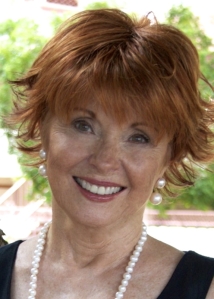 In an Arizona prison, at age 57, Sue Ellen Allen discovered she had advanced breast cancer. A university educated community leader, she found her purpose while serving time for securities fraud. She is now a passionate activist, co-founder and Executive Director for GINA’s Team, named for her prison roommate who died there of medical neglect. Gina’s death was the defining moment of Sue Ellen’s journey.

Gina’s Team brings educational programs into prison to inspire and empower the inmate population to strive for a better future and a successful reentry. Their collaboration with ATHENA International to teach the ATHENA Leadership Model has resulted in successful recidivism numbers of five percent.

In prison, under harsh conditions, she survived breast cancer and learned to turn her pain into power. Now she works with prison officials, legislators, and Arizona State University to serve the forgotten population behind bars so that upon their re-entry to society, they will join our community as positive, contributing members.

The author of The Slumber Party from Hell, a memoir about her prison journey, Sue Ellen was awarded the ‘Dawson Prize in Memoir’ in the 2009 Prison Writing Contest for PEN American Center. Her writing was also included in Serving Productive Time by Tom & Laura Lagana, authors of Chicken Soup for the Prisoner’s Soul. Additionally, many of her poems have been published in Cosmopolitan magazine.

She is an inspirational speaker with a unique story and powerful message. Despite horrific odds, we must use our stories to make a difference and we must never give up.

22 Comments on Breast Cancer Behind Bars by Sue Allen