Rayne Hall is a writer of horror and fantasy fiction as well as non-fiction books. She has written around sixty books across various genres under different pen names, which have been translated into many languages. Her short stories have been published in magazines, ezines and anthologies.

What’s your writing background, when did you begin writing and what inspired you?

When I was six, I told the teacher that the stories in the school book were stupid and I could write better ones. She challenged me to write a story about a letter’s adventures from writing to delivery. When I handed it in, she was startled that a six year-old could write so well. Of course, she didn’t know I’d had the help of my older sister. From then on, when the other kids had to read the dull pieces for their homework, she often assigned me to write stories, and I soon learnt to do it without my sister’s help.

As a teenager, I found Edgar Allan Poe’s stories with their psychological suspense irresistible, and started writing dark fiction. It took many years of practice, though, before I learnt to write really well.

I’ve worked in publishing for thirty years, often in roles that involved writing or working with writers, and this has given me practice and invaluable insights. I’ve been an investigative journalist, freelance art reporter, magazine editor, page designer,  commissioning editor, literary agent and more.

I also have a masters degree in Creative Writing.

How often do you write, and how do you manage to fit in writing among other commitments?

I write every day; sometimes more, sometimes less.  Even when I’m nsot writing, I’m plotting stories in my head and taking notes about places and people, for use in future stories.  Writing has always been part of my job – either in an employed role or freelance, either as my day job or as a spare time career.  When you write for a living, writing becomes a priority. 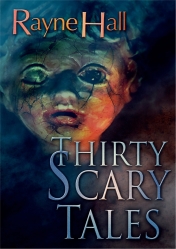 Most of my books (around sixty by now, I have lost count) are non-fiction, fantasy or horror.  I enjoy them all – although after writing several non-fiction books, I crave writing fiction.

I enjoy writing horror: scaring readers is fun.  I like nothing better than making my readers’ skins crawl with apprehension, their spines tingle with suspense and their hearts thump in delicious fear.

Whatever genre I intend to write, it often turns into horror. Some years ago, I started a light-hearted Regency Romance novel. At first, all went well, with lots of funny situations and witty banter… but then I discovered that there was a centuries-old curse on the family, the hero had a guilty secret, the vengeful housekeeper was on a serial killing spree. The story grew darker and darker. Another time, I had this idea for a cute story for children… but by the time the story was finished, all the cute children were dead, sacrificed to an ancient god. This happens all the time. Even my lightest, funniest stories have an element of macabre humour. I no longer fight the calling. I guess I’m meant to write dark stuff.

With fantasy, I cherish the chance to let my imagination roam and take the reader to worlds I have created. Fantasy a fabulous genre for exploring ‘what if…?’ 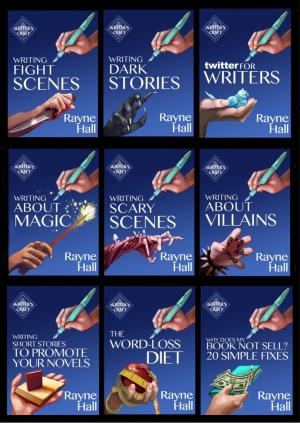 With non-fiction, I like to write practical books of the how-to type,  helping my readers to achieve something. It’s rewarding to play a part in a reader’s success.

For example, with Twitter for Writers, I show writers how to use Twitter to improve your writing, network with other authors, meet fans, build a platform, gain exposure, find reviewers and sell books. I share the tricks I’ve discovered, such as how to get past the dreaded 2K hurdle, how to spot fake accounts, and how to make a tweet go viral. It’s been fun to write this book because writers need different things from Twitter than ‘normal’ people.

As usual, I’m working on several books at once. I like having several projects on the boil at once, so I can switch between them and never get bored.  Right now, I’m writing a sequel to my bestselling dark epic fantasy novel Storm Dancer, and revising several dark steampunk stories.  I’m doing the final edits for Cogwheels: Ten Tales of Steampunk (an anthology with stories by specfic writers of which I’m the editor). I’m also at work on the next book in the bestselling Writer’s Craft series. It’s a practical guide for indie authors titled Why Does My Book Not Sell? 20 Simple Fixes.

I have many projects in the pipeline and in progress – fiction and non-fiction, short stories and novels, writing and editing.

There’s a mini video about me – very short, my Amazon author page is here, my website is here and you can follow me on Twitter where I’m very active @RayneHall and on my Facebook page. 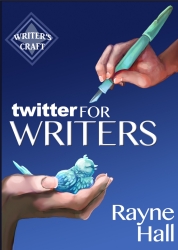 Rayne Hall’s recently released book Twitter for Writers is available on Amazon UK and Amazon US as are all her books.

2 Comments on In the Booth with Ruth – Rayne Hall, Author