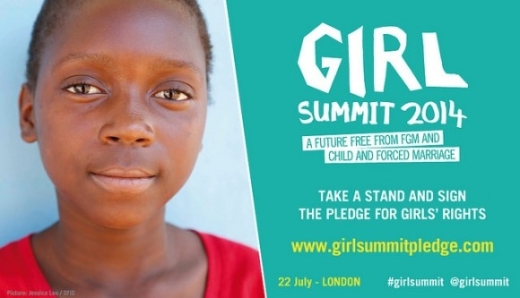 Image courtesy of the UK Department for International Development

A Parent’s Pledge for Girl Summit 2014 (via http://donnanavarro.com)

To read the full article by Donna Navarro click here.

When my family and I sat down to breakfast yesterday, my daughter asked what my plans were and why I was up and working so early. My computer was switched on and I was preparing to follow the live stream of the UK’s first Girl Summit co-hosted by Prime Minister, David Cameron and children’s charity, UNICEF.

When we hear about the issues of female genital mutilation (FGM) and child early and forced marriage (CEFM) here in the UK, I think we often consider them someone else’s problem. If it doesn’t directly affect us as individuals, we think we don’t need to concern ourselves with it, right? Wrong. If you’re a parent, this most definitely concerns you.

According to a new study revealed on the day of Girl Summit from the City University, London and Equality Now, in the UK alone there are around 130,000 FGM survivors aged 15-49, 24,000 women aged 50 and over and 20,000 young girls aged under 15 years. That’s far too many women and girls affected by female genital mutilation living in the UK.

Globally, according to new UNICEF data, 130 million women and girls have experienced some form of FGM. As many as 30 million girls alive today could have their genitals mutilated in the next decade – simply because they are born female.

I know that’s a lot of figures to throw out there, so let’s focus on you for a few seconds.

Did you know that you blink once every two to ten seconds? Neither did I until actress and Plan UK Ambassador, Frieda Pinta informed me. That’s an awful lot of blinking in an hour. And a huge amount of blinking in a day. How many times did you blink whilst reading this paragraph? For every blink you just did, in Africa, some girl will have had her genitals cut.

There are no arguments for the practice of FGM. It is a violation of human rights, yet it continues to happen all over the world; we might not like to think so, but yes, that includes right here in the UK. Turning a blind eye is simply not acceptable any more…

Incomprehensibly, girls as young as eight are sold into marriage to men literally as old as their fathers. Just seven years ago, my daughter came into my world, changing it forever, filling my heart with joy. Every day she makes me laugh, smile, ache with pride. Imagine your daughter, your niece, your granddaughter for a moment. Their happy, smiling faces playing carelessly with their friends, giggling over the silliest things, heading off to school with that amazing eagerness to learn.

Now imagine all the girls in the world that are being denied that opportunity.

700 million women alive today were married as children – that’s four times the female population of the USA. Imagine all those childhoods destroyed – girls forced to marry, their bodies placed at risk, of possible death during childbirth, as they try to cope with the pregnancy and birth of a baby when they’re still only children themselves.

To read the full article by Donna Navarro click here.

2 Comments on A Parent’s Pledge for Girl Summit 2014