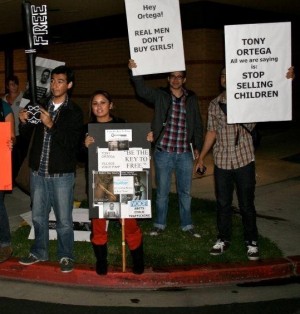 I was inspired to support the movement against human trafficking by creating and starting a non-profit called The Majestic Dreams Foundation (www.themajestic.org) because I wanted to create awareness on all forms of abuse. Having been in the film industry for a little over eight years as an award-winning cinematographer, I decided to create a company that would embody and create films that make an impact, therefore, making a difference. I was featured on CNN’s Anderson 360, Al Jazeera English on my work on human trafficking and sexual exploitation.

One of the biggest things we can do to combat human trafficking and human exploitation is by shedding light and exposure on this topic. Using my connections and skills in the film industry, I am able to maximize and create exposure, thereby reaching the most amount of people. I created MDF because I wanted to be a voice for of all forms of abuse.

What draws you to support people who are trafficked and sexually exploited?

I am a survivor of both sexual and domestic physical abuse, and I wanted to help be the voice for those who are too afraid to speak up. I want their stories to never be forgotten. My overall goal with MDF is to create 5k survivor runs/walks, and various fundraisers to help fund awareness films, as well as victims’ outreach scholarship. We developed a Key2Free campaign, where survivors and non-survivors can band together and promote an abuse-free world in their personal lives. By being the “Key2Free” means you are being the key to a world free of abuse. Submit a Key2Free video today by saying, “I am the key to free.” Or you can purchase our custom made sterling silver Key2Free pendant with chain, and be proud to represent this movement. Every donation will help us combat abuse. www.themajestic.org/products.html

Can you tell me about the films you’ve made in the area of human trafficking?

Some of the work I’ve produced, directed, and did the cinematography for include Insatiable (www.insatiablethemovie.com), a short film about a young, disobedient teenage girl who sneaks out of her house. One night, she’s caught by her mom and is warned that bad things can happen to her if she continues her behavior. Unfortunately, one day, she learns that lesson the hard way, and is kidnapped one night as she sneaks out to go visit a friend. She’s thrown into a human trafficking ring that covers as a strip club, and is forced to become a prostitute. Insatiable gives a small glimpse on how easy it is to be taken and thrown into sexual exploitation, and thereby serves as a warning to young teenagers.

Forsaken Dreams is a feature documentary about eight survivors of various forms of abuse, from rape, incest, molestation, and domestic abuse, through to human trafficking and sexual exploitation, sharing their personal challenges growing up with a life filled with abuse. It’s about self-discovery, and fighting for what’s right, despite all the obstacles. Forsaken Dreams’ purpose is to shed light on abuse by providing awareness so we, as a society, can do something about it.

Traffick in L.A. is a feature documentary about sexual exploitation and human trafficking in one of the United States largest cities, Los Angeles.

The Red Light is a feature film in development about a young girl thrown into human trafficking and sexual exploitation; she must fight her way out before the life consumes her.

How did you go about setting up your non-profit organisation?

There was a lot of things entailed to starting MDF because it’s not a cheap process. My husband and I paid out of pocket first to create the non-profit corporation. Next, I had to start fundraisers online to raise enough money to be able to pay for the fees to create a 501c3 tax exemption status, which took most of 2012.

What’s the main purpose of your role?

I am the founder/president of MDF. My current role is overseeing and creating projects that benefit the purpose of MDF and bringing them into fruition.

What legal improvements or changes would help to abolish human trafficking and sexual exploitation?

Legal improvements that would help abolish human trafficking and sexual exploitation would be harsher punishments on the pimps and the johns.

What people can do to help the problem is get off the computer, get out there, and do something about it. Posting things on Facebook on forums where people already know what human trafficking/human exploitation is, is not going to help. Get out there, be proactive on the fight to end abuse. Human exploitation is abuse, and I want people not to forget that. As a society, we need to fix that problem by combating all forms of abuse.

People who want to help can donate to MDF; each donation will help us in our effort to create awareness films and our long-term goals of outreach programs. People need to speak up against it, and if people are aware of what is going on in their daily lives, they need to say something. By not saying anything, we are not helping anyone.

My plan for the future is to keep doing what I’m doing. I will never stop until I am six feet under. My job is to expose corruption.