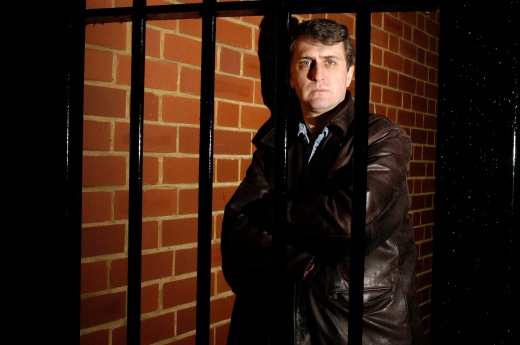 I was a journalist for more than a decade with staff jobs on the Glasgow Herald, the Daily Mirror, the Daily Mail, the South China Morning Post and the Times. I always wanted to write fiction but it wasn’t until I had worked as a journalist that I had the necessary skills. My first book – PAY OFF – was published when I was thirty and I have been writing fiction full time since I was thirty-five. I’ve also written for TV shows including The Knock and Murder In Mind, and my screenplays of my books THE BOMBMAKER and THE STRETCH were filmed for Sky One.

Every day! It’s not a question of fitting my writing among other commitments – it’s the other way around. I fit everything else around my writing. I try to write every day and over the year I would say that I average about 2,000 words a day. Sometimes less, sometimes more.

I enjoy them all. I have written crime, action thrillers, vampires, horror, science fiction, erotica, and I’m now attempting a western. But I guess action thrillers is what I’m most comfortable with.

I enjoy writing action scenes with snappy dialogue. Nothing bores me faster than a couple of cops plodding along to solve a murder that no one really cares about. I want doors to be kicked down, guns to be blazing and the odd chair being thrown through a window. And if there’s a government conspiracy somewhere at the back of it then so much the better!

As usual I have several irons in the fire. Having multiple projects on the go is the best way of combating writer’s block. If one project starts to go slow then I simply switch to another one. At the moment I am putting together my first Western – DOBBSY THE COWARDLY COWBOY. It’s about a cowboy called Dobbsy who talks the talk but is unable to walk the walk, a gunslinger with a yellow streak who would always prefer to run than fight. Dobbsy manages to avoid a posse when the menfolk ride out of town in pursuit of bad guys. But to Dobbsy’s horror as the posse rides out a team of bank robbers rode into town – and Dobbsy has nowhere to hide. But I’m also working on TAKE TWO – an eBook novella about a soap opera star who witnesses a gangland killing – and plotting out my new Spider Shepherd thriller, which will possibly be called TRUE COLOURS. Plus I’m editing the new Jack Nightingale book. It’s called NIGHTSHADE and will be published next April. Busy, busy, busy!

I am writing a Jack Nightingale supernatural detective every year, and a Spider Shepherd action thriller every year. I am also planning some Spider Shepherd stories about his time in the SAS in Afghanistan. I am also putting together a non-fiction book about trolls on the internet, and on Twitter in particular. It’s been a while since I did any serious journalism and I’m enjoying interviewing and collating information again. Over the last year or so there have been some very unpleasant incidents on Twitter – which have led in some cases to deaths and libel actions – and I’m keen to expose the sort of people who get a kick out of being unpleasant online.